This review was originally published in April, 2014.

This Sailor King of Pen was sent to me to have its nib ground into a cursive italic, so, unfortunately, I don’t have any of the packaging to show off. But, once you get a good look at this pen you’ll hopefully forgive me. The King of Pen is a very large cigar-shaped pen. This one is made from black hard rubber and polished to a mirror-like shine, but it’s available in different colors of urushi or black resin, each with gold and nickel trim options.

This pen features the classic black and gold combination which I think goes very will with the overall subdued look of the pen. The clip is simple, yet functional with just the right amount of tension, and there’s no cap band to distract you. It’s really just all about the nib here and, on this pen, the nib is huge!

The King of Pen contains a massive #9 nib that’s that same size as that found in a Montblanc 149. Like all of Sailor’s other nibs, this one is made from 21k gold and has a lovely two-tone design. The feed is plastic and does an excellent job of controlling flow. John Mottishaw of nibs.com says Sailor produces some of the finest nibs in the world. After using this one, it’s hard to disagree.

With a nib this large and a name like “King of Pen”, you’d expect this pen to be big. And it is. From left to right we have the Parker Duofold Centennial, the Montblanc 149, the Sailor King of Pen, the Pelikan M1000, the Pelikan M800, and the Pelikan M200.

Uncapped, I’ve lined them all up at the front of their sections so you can see how the nibs compare and also how long the barrels are. The King of Pen is very nearly a carbon copy of the 149 and it’s just a hair shorter than the M1000. So it’s definitely a big pen. 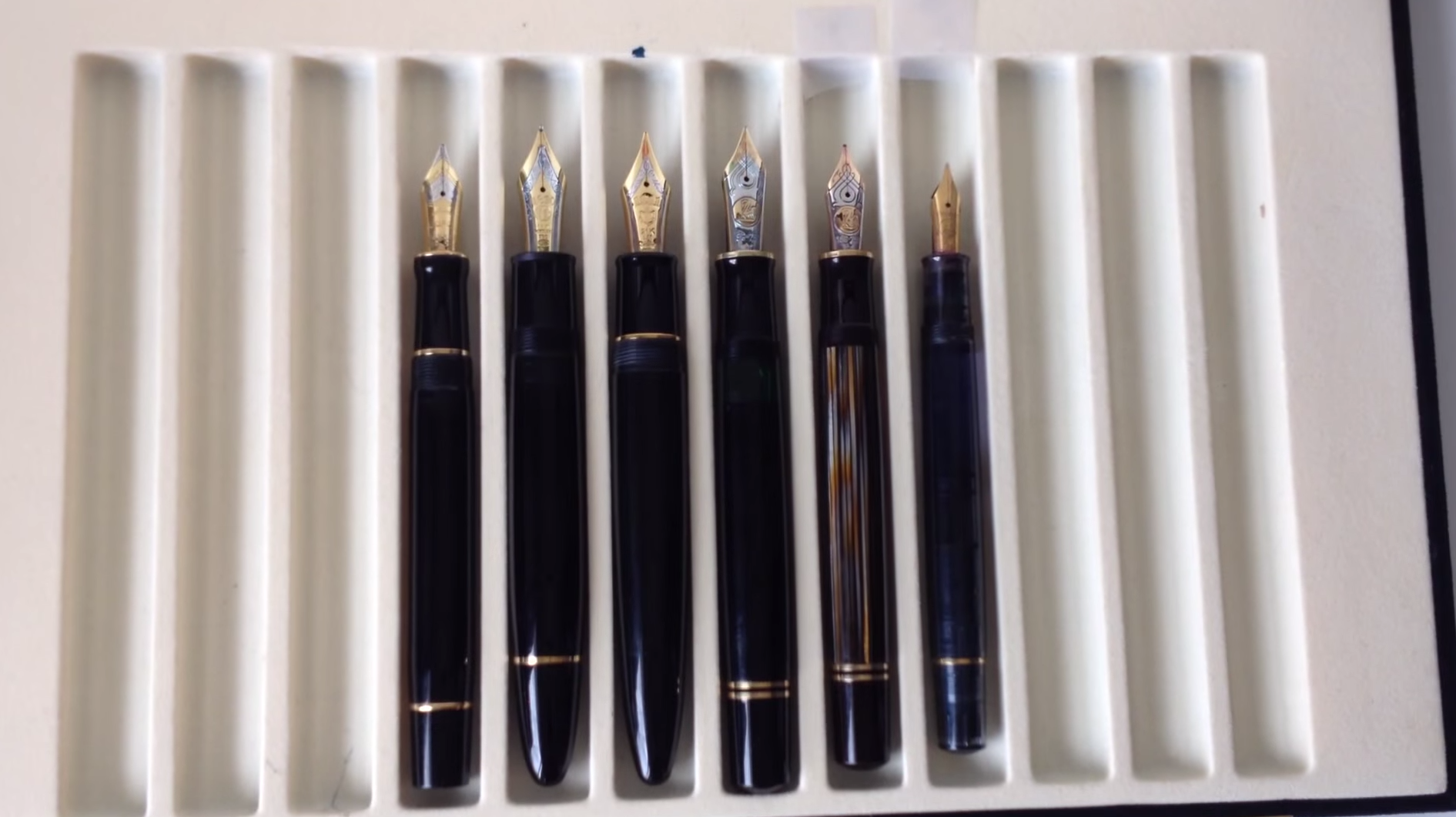 Posted, the King of Pen is still very similar to the 149. And just look at that little M200. Doesn’t it look so cute next these gargantuan pens?! 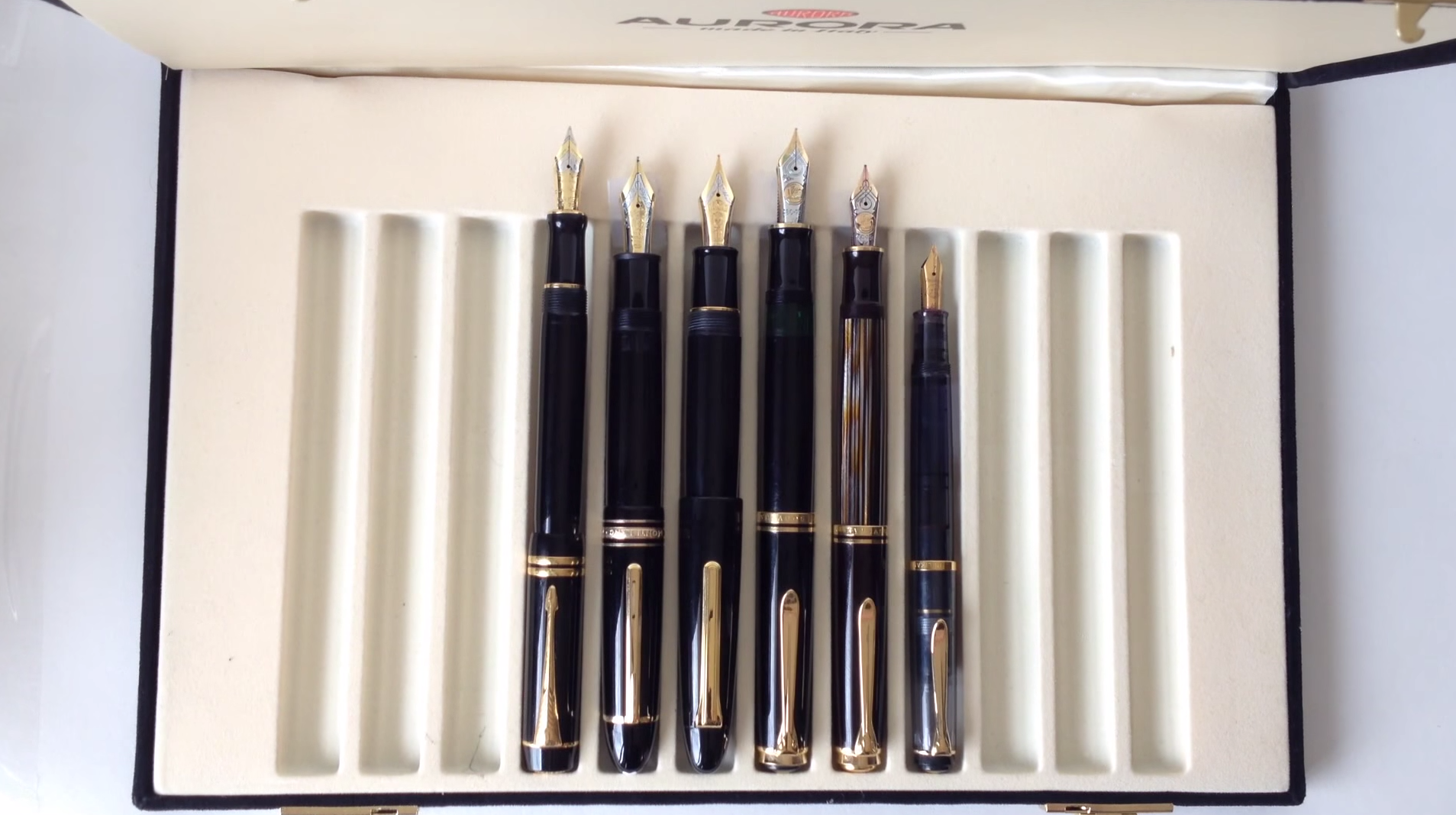 As large as the King of Pen is, it’s still incredibly comfortable in the hand thanks to its light weight and tapered design. If you’re looking for even more size, you can always post the cap. It sits far enough down the barrel to prevent from feeling awkward and attaches very securely. Either posted or not, the King of Pen is a comfortable writer. The hard rubber the pen is made from gives it a warmer feel that resin just doesn’t have.

For the writing sample, I’m going to use Irhoshizuku Tsutsuji, which is a lovely deep pink with an attractive sheen to it. And here’s where we come to the only disappointing aspect of the pen, the cartridge converter filling system. As much disdain as I have for the c/c filling system, I will say that it’s far from a deal breaker here simply because every other aspect of this pen is so amazing. Seriously, you don’t want to skip on this pen just because it has a c/c filler.

The King of Pen is only available with a Medium or Broad nib, which run about a full size smaller than western nibs, so think of it as a Fine or Medium. But there are a few specialty nibs available if your pocket book can handle it. Getting back to the nib in this pen, I was totally blown away by how good it was. It is thee smoothest nib I’ve used in a long time! Flow is what I would consider perfect, being a just a hair on the wet side, and the nib is soft enough that when you push into it, you can get some beautiful line variation. The nib is very responsive and not mushy. The tines spring back nicely and the entire package makes for one of the best writing experiences I’ve had in a while. I can’t guarantee every pen will be this good out of the box, but if you get one that’s even remotely close, you’ll be impressed.

So, if you couldn’t tell, I really like this pen. I’ve used a few Sailor pens before, but never a King of Pen, and never one as good as this. I love its size, I love its design, and I love its nib. I especially love the hard rubber it’s made from because it feels so much warmer in the hand than resin.

So how much will all this new love set you back? Well, it depends on where you buy it. In the US, this pen sells for $840. Yikes! I mean, that’s only about a hundred shy of a Montblanc 149. But, if you buy it from Japan, you can get it for less than $550. At $550, I would highly recommend this pen. The nib is stunning and the whole package just makes for a magnificent writer. If you don’t like the simplicity of this pen, check out the Pro Gear King of Pen or the 1911 King of Pen, both of which feature cap bands and accent bands and a cheaper price of only $467.